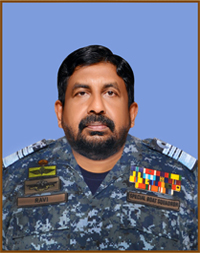 Admiral Ravindra (Ravi) Wijegunaratne was educated at the Royal College, Colombo 7. He joined the Sri Lanka Navy as an officer cadet of the 9th Intake on 01st November 1980. He underwent his basic training at the Naval and Maritime Academy, Trincomalee and at the prestigious Britannia Royal Naval College (BRNC), Dartmouth, UK. He was the recipient of the “Best International Midshipman” award at the BRNC, Dartmouth in year 1982. He specialized in Anti Submarine Warfare and also a qualified diver, paratrooper, and Special Forces person.

His last sea command was SLNS Sayura (Offshore Patrol Vessel),one of Flag Ships of the Sri Lanka Navy. The other key appointments he has held during his unblemished naval career of 35 years are: Commandant Naval & Maritime Academy, Flag Officer Commanding Naval Fleet, First Secretary and Defence Adviser of the Sri Lanka High Commission in New Delhi- India, Director Naval Operations, Special Forces, and Maritime Surveillance, Commander Southern, Western, Northern, and Eastern Naval Areas, Director General of the Sri Lanka Coast Guard and Chief of Staff. He was appointed the Command of the Navy on 11th July 2015.

Admiral Wijegunaratne is the senior most Special Forces naval officer who was instrumental in forming the Sri Lanka Navy’s Special Forces element known as the Special Boat Squadron (SBS) which contributed immensely during the conflict period. He commanded this elite unit twice in his career and has led a number of SBS operations behind the enemy lines and amphibious operations including the famous ‘Pooneryn Operation’ in 1993.

Admiral Wijegunaratne is a highly decorated senior naval officer with four gallantry medals for his act of bravery and valour. He is a recipient of ‘Weerodhara Vibushanaya’, the highest gallantry medal in Sri Lanka for non-military nature, ‘Rana Wickrama Medal’ awarded twice for individual gallantry in the face of the enemy and ‘Rana Sura Medal’ for collective gallantry in the face of the enemy. He was also awarded with ‘Vishista Seva Vibhushanaya’ (VSV) and ‘Uththama Seva Padakkama’ (USP) for his unblemished and exemplary naval career.

He earned his BSc (Hons) degree in War Studies from the Karachchi University, Pakistan in 1996 and MPhil in Defence and Strategic Studies (First Class) from the University of Madras in India in 2010.

He is also an alumni of the National Defence University, Washington DC, USA (NESA Centre). He is widely known as an expert in “Asymmetric Naval Warfare” and “Small Boat Operations.”

He is married to Yamuna Wijegunarathne, who was Miss Sri Lanka 1989 and blessed with a 23 year old son, Satyajith.