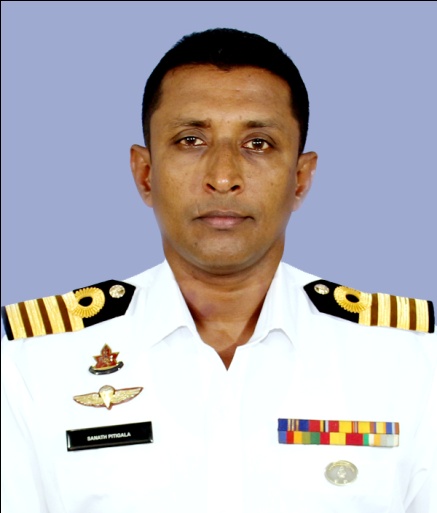 Captain PASK Pitigala was educated at the Darmaraja College Kandy. He has joined the Sri Lanka Navy on 01st February 1990 as an Officer and underwent his basic training at the Naval & Maritime Academy, Trincomalee. He read his Junior Command & Staff Course at Bangladesh in the year 2001. Proving his capability, he successfully completed the Senior Command Course in India in 2010. He was holding appointments as Commanding Officer & A/NOIC (Trinco South) at SLNS Kashyapa, Principal Security Officer to Commander of the Navy at Naval Headquarter and Deputy Director Land Operations and Deputy Director Marine at Naval Headquarter. Presently he hold the appointment as Deputy Director Marine at Naval Headquarters.

He contributed immensely, with the Humanitarian operations to eliminate the LTTE and to liberate the East and North, which led to final war victory in Sri Lanka. Captain PASK Pitigala has been awarded Rana Sura Padakkama (RSP) and seven other medals for meritorious and distinguished service.

He is married to Mrs. Amaraweera and blessed with a son and a daughter.